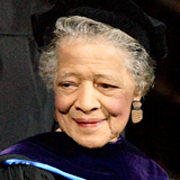 Vel R. Phillips is a civil rights leader, legal pioneer, and philanthropist. She is a “leader of leaders” and a champion for equality. Esteemed for her masterful negotiation and articulation of racial and gender issues, Ms. Phillips earned the trust and confidence of three Presidents: John F. Kennedy, Lyndon B. Johnson, and Jimmy Carter.

After growing up on Milwaukee’s South Side, she earned a scholarship to Howard University, where she earned her bachelor’s degree in 1946. Her impressive career began when she became the first African American woman to attend and graduate from the University of Wisconsin’s Law School in 1951. In 1947 she met and married Dale Phillips, who also attended the University of Wisconsin’s Law School. After their respective graduations Dale and Vel became the first husband-and-wife legal team admitted to the federal bar in Wisconsin.

Ms. Phillips’ parents encouraged her sensitivity to racial inequality, and her husband was a tireless supporter throughout her political career. Two years after graduation from law school, Ms. Phillips sought election to the City of Milwaukee School Board. Although unsuccessful she persevered. Win or lose Vel Phillips pressed forward, challenging School Board policies that disadvantaged African American teachers and students.

By 1956 Vel Phillips had become the first woman and first African American elected as a member of the Milwaukee Common Council where she served for fifteen years. During press interviews she challenged assumptions about the roles of professional women. She called herself “twice blessed” in that she had won election to the Council while expecting her first child. Two years later she gave birth to her second son.

In 1958 Ms. Phillips became the Wisconsin Democratic Party’s first African American national committeewoman. As a member of the Democratic National Committee she was the first African American to serve in that capacity for any political party in the United States. A nationally prominent politician, she advocated for enforcement of Brown v. Board of Education and for a strong civil rights platform. Featured in a film that enjoyed wide circulation, Ms. Phillips became a celebrated international figure whose political career symbolized progress in racial relations in the United States.

In recognition of her many accomplishments she was invited to serve as Distinguished Visiting Professor of Law at Marquette’s Law School during the 2002-2003 school year.

In 2006 she established the Vel R. Phillips Foundation, an organization which will continue her legacy through financial support of programs that work to address injustice. Because of her strong leadership, dedication to public service, and advocacy of civil rights, Reverend President, I hereby recommend Vel R. Phillips for the Marquette University degree of Doctor of Laws, honoris causa.