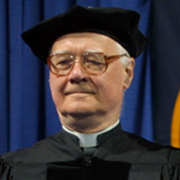 He is a prolific writer and scholar whose works include The Way The World Is, Evidence of Purpose, Scientists as Theologians, The Faith of a Physicist, and Belief in God in an Age of Science. He is a renowned speaker on the international stage for his unique perspective as a theoretical physicist who reflects

Rev. Dr. Polkinghorne received the doctoral degree in Physics from Cambridge University in 1955. His research established him as one of the leading scholars in elementary particle and quantum field theorists of the time. He served as Lecturer at the University of Edinburgh from 1956 to 1958, returned to Cambridge as Lecturer in 1958, became Reader in 1965, and was appointed Professor of Mathematical Physics in 1968. His election as Fellow of the Royal Society in 1974 denoted his significant contributions to human understanding of the nature of elementary particles.

Throughout his life a man of great faith, Rev. Dr. Polkinghorne made a profound decision in 1979 to leave the world of theoretical physics and to study for the priesthood in the Anglican Church at Westcott House in Cambridge. Ordained a deacon in 1981 and a priest in 1982, he served in several parishes before returning to Cambridge University in 1986 as Dean and Chaplain at Trinity Hall. He became President of Queen's College in 1989, retiring in 1996. During this second career, his ability to bring scientific and faith-based reasoning to bear on matters of broader scope led him far afield of physics and into important issues in both biology, such as transgenic breeding and fetal research, and in medicine, including drug abuse treatment, genetic testing, and medical ethics. In 1997 Queen Elizabeth II knighted him for his distinguished service to science, religion, and medical ethics.

His accomplishments were also recognized in 2002 when he received the Templeton Prize for Progress in Religion, an award founded by Sir John Templeton in 1972 and given annually to a living individual to honor the advancement of spiritual matters. Joining three other physicists who have received this award, Rev. Dr. Polkinghorne stands out for his steadfast commitment to traditional Christian doctrines and dogmas, including God as Creator of the world, the Blessed Trinity, and the resurrection of Jesus Christ, all of which he seeks to explain through the rigorous lens of scientific methodology. He has demonstrated in impressive fashion that science and theology are not opposed to one another. Celebrating the distinctiveness of the data, methods and purviews of the natural sciences and theology, he has achieved a new level of understanding of their conceptual integration that is meaningful and relevant for Christians in an age of scientific and technological achievement.

Because of his unwavering contributions to a scientific and faith-based inquiry about the world and his cogent exemplification of how knowledge can be integrated to achieve a broader and deeper understanding of the world and the human condition, a signal focus of Marquette's Core of Common Studies, Reverend President, we hereby recommend John Charlton Polkinghorne for the Marquette University degree of Doctor of Science, honoris causa.