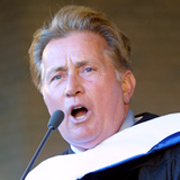 Martin Sheen is an award-winning actor, director, and producer. Currently, he has a starring role in the Emmy Award-winning NBC television drama, “The West Wing,” in which he portrays President Josiah Bartlet. Mr. Sheen’s social consciousness is evident in the acting roles he chooses, where he consistently portrays characters whose principles make a difference. Among these are his film roles as Peter Maurin, who with Dorothy Day founded the Catholic Worker Movement, and as Mitch Snyder, a Vietnam veteran who fought for America’s homeless by staging hunger strikes and demonstrations against government bureaucracy. Mr. Sheen’s work has been recognized by his colleagues with an Emmy Award and with the prestigious Lifetime Achievement Award from the Imagen Foundation, an organization that honors positive portrayals of Latinos in film, television, and advertising.

In addition to his excellence in film and television, Mr. Sheen is a tireless champion of social justice in our world, and his work as a humanitarian and social activist is noteworthy. He promotes justice as a parish volunteer in soup kitchens and youth programs, as a nonviolent demonstrator protesting nuclear testing and the School of the Americas, and as a spokesperson for the United Farm Workers and the Arctic National Wildlife Refuge.

Marquette University is proud to welcome Mr. Sheen to Marquette and to acknowledge his many contributions both as an artist and as a social activist. For more than forty years Mr. Sheen has demonstrated care and concern for the poor and less fortunate of our society. Through his creative work and through the causes he champions, he has assumed a significant place in American consciousness as a strong advocate for justice and peace. In that way, his work is directly tied to Marquette’s mission statement, a portion of which reads, “Marquette strives to develop men and women who will dedicate their lives to the service of others, actively entering into the struggle for a more just society.”

Because of his remarkably excellent work in film and television and his dedication to the pursuit of social justice for all members of our human family, Reverend President, I hereby recommend Martin Sheen for the Marquette University Degree of Doctor of Letters, honoris causa.