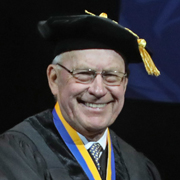 David A. Straz, Jr., through a distinguished career dedicated to philanthropy, has been active in supporting higher education, the visual and performing arts, and a myriad of civic projects.

After graduating from Marquette University in 1965, David began a career in banking and finance.
He built banking organizations in Wisconsin and Florida which he sold to U.S. Bank, Bank of America, and Fifth Third Bank. His success in these fields provided him the ability to create opportunity and advancement not only in the United States, but also in Africa and Central America.

David has been extremely instrumental in a variety of international development efforts. He is the Ambassador at Large and Honorary Counsel General to both the Republic of Liberia and to the Republic of Honduras. Working with the governments of these countries, David is active in efforts to promote education and economic development and to ensure that future generations there receive opportunity. In 2012 the University of Liberia dedicated the David A. Straz, Jr., Sinje Campus, and in 2007 he received the Humanitarian of the Decade award from the College of West Africa, located in Monrovia, Liberia.

David has been particularly active in supporting the arts. He is a Managing Director of the
Metropolitan Opera in New York, and has transformed the arts scene in his home city of Tampa,
Florida, through the creation of the David A. Straz, Jr., Center for the Performing Arts. The center, in addition to offering a range of performances, offers educational programming across the city and
allows children and educators to have access to a full range of arts experiences. David and his wife, Catherine Lowry Straz, received the Kairos Award from the Haggerty Museum of Art in recognition of their distinguished role in fine arts.

David’s generosity can also be seen in the promotion of conservation, research and education in the sciences. His gift led to the establishment of the Manatee Hospital at the Lowry Park Zoo in Tampa. The work there helps ensure the long-term survival of this critically endangered species and promotes conservation of Florida’s delicate ecosystem.

David has been incredibly generous to and supportive of his Alma Mater. He served as a member of the Marquette University Board of Trustees from 1985 to 2007, and as Chair of the Board from 1997 to 2001. His leadership and support for the College of Business Administration, the Haggerty Museum of Art, and other projects helped reshape the university over the past decades. In 1984 Marquette dedicated David A. Straz, Jr., Hall as the home of the College of Business Administration, and in 2002 dedicated David A. Straz, Jr., Tower as a premier residence hall. He served for many years on the National Board of Visitors for Marquette’s Les Aspin Center for Government and was instrumental in its founding. He spearheaded the fundraising effort to establish the Aspin Center and promoted the
vision of the program to others in the business and philanthropic community. His support, vision and counsel helped the Aspin Center grow into the preeminent program of its type in Washington, D.C., with a focus on educating public servants committed to ethics and integrity.

Because of his philanthropic work in service of education, the arts, and civic projects around the
world and at Marquette, President Lovell, I hereby recommend David A. Straz, Jr., for the Marquette University degree of Doctor of Laws, honoris causa.