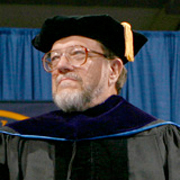 Candidate presented by: Dr. Robert Deahl, Dean of the College of Professional Studies

Mr. Teerlink's professional career and personal life are marked by a love for the accomplishments of others, a deep and abiding humility in the face of success, toughness in facing reality and transforming it into opportunity, and a lifelong commitment to leadership excellence. His vision of leadership places people at the center because, as Mr. Teerlink frequently states, "People are the organization's only sustainable competitive advantage."

Harley-Davidson hired Mr. Teerlink as vice president and chief financial officer in 1981 when Harley's leadership agreed to radically reshape the corporate culture. Over the next decade Mr. Teerlink provided the vision, commitment, and leadership that threw out standard management practices of command and control and replaced it with a set of operating principles and an organizational structure based on collaboration, teamwork, and mutual respect.

During Mr. Teerlink's tenure Harley-Davidson rebuilt its famous brand based on five core values: tell the truth, be fair, keep your promises, respect the individual, and encourage intellectual curiosity. As Peter Senge, founder and chair of the Society for Organizational Learning, states, "Because of Rich's commitment to build a company where people are the center of the enterprise rather than an 'input' or an 'expense,' Harley's brand has come to stand not just for 'made in America' but for people connecting with one another and a paradoxical "

Since retiring, Mr. Teerlink regularly speaks to corporations, organizations and educational institutions around the world. He supports numerous organizations committed to the development of people. He is a champion and advocate for Marquette University's College of Professional Studies, responsible for the unique educational partnership between Harley and the College that allows employees to pursue their degree in Leadership Studies at the corporate headquarters. This year marks

Because of his commitment to leadership excellence and to creating an ethos of service and lifelong learning throughout our community and our world, Richard F. Teerlink is commended for the Marquette University degree of Doctor of Laws, honoris causa.