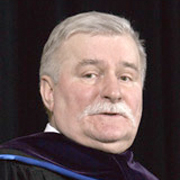 Lech Walesa burst into the world spotlight in 1980 during the infamous Lenin Shipyard strike in Gdansk, Poland. Incensed by an increase in prices set by the Communist government, workers were demanding the right to organize free and independent trade unions.

On August 14, 1980 Lech Walesa, an electrician who had long been active in the underground labor movement, arrived at the barricaded shipyard just as the dispirited workers were on the verge of abandoning their strike. Scaling the shipyard walls, he delivered a stirring speech from atop a bulldozer. Revitalized by his passion, the strike spread to factories across the nation. Christened “Solidarity,” the strike became a social revolution.

Walesa entered into negotiations with the government, convincing it to grant legal recognition to Solidarity and the right to workers to form independent unions and to strike. This became the Gdansk Agreement, which Walesa signed on August 31, 1980. The Catholic Church supported the Solidarity movement, and in January 1981 Walesa was cordially received by Pope John Paul II in the Vatican. Walesa himself has always regarded his Catholicism as a source of strength and inspiration.

For his heroic efforts, Walesa was named “Man of the Year” by Time magazine, The Financial Times, The London Observer, Die Welt, Die Zeit, L’Express and Le Soir. Over the next eighteen months, however, relations between Solidarity and the government became progressively worse until on December 13, 1981 the Polish government declared martial law. It suspended the activities of all unions and arrested thousands of Solidarity members, including Walesa. In the fall of 1982 the government officially outlawed Solidarity.

Walesa was released that same fall. Under his leadership, Solidarity continued to exist as an underground organization. Celebrated worldwide as a symbol of the hope for freedom, Walesa was awarded the Nobel Peace Prize in 1983. For the next five years, Poland became marked more and more by chaos and labor unrest. Acknowledging that it could no longer control the country, the government re-legalized Solidarity and invited it to join the Communist Party in forming a coalition government. In the resulting elections in 1989, Solidarity won almost every contest.

Having ended Communist rule and planted the seeds of freedom and democracy in his beloved country, Walesa was ready to take on a new role to serve Poland. On December 9, 1990 he became Poland’s first democratically elected president, winning more than 74 percent of the votes cast. His term in office set Poland firmly on the path to becoming a free market democracy. He served as President of Poland from 1990 to 1995.

Through his efforts, Walesa made Poland a model of economic and political reform for the rest of Eastern Europe to follow and earned it the honor of receiving one of the first invitations to join an expanded NATO. He now heads the Lech Walesa Institute, which works to advance the ideals of democracy and free market reform throughout Eastern Europe and the rest of the world.

Because of his unwavering commitment to democracy and because of his lifelong work for justice as well as his commitment to promote basic human rights, Reverend Father President, I hereby recommend Lech Walesa for the Marquette University degree of Doctor of Laws honoris causa.