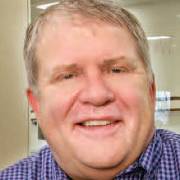 Mark Zoromski, director of student media and adjunct professor of journalism and media, formed his philosophy for teaching on his wedding day. As he looked across the crowd gathered to watch him and his wife-to-be, Jill, say their vows, he noticed a man sitting in the back row smiling from ear to ear. It was his college broadcast journalism professor, Henry Lippold.

To this day, Zoromski strives to live and teach by this simple philosophy, expanding the family mentality not only to his classroom students but also to the roughly 240 students involved in student media.

Zoromski, using his background in working at local news stations, has been teaching students for more than two decades. He joined Marquette in June of 2016 and since then has fully embraced the Marquette spirit.

“Cura personalis defines Mark’s approach to teaching and student mentorship. Mark cares for the entire student, and he expects personal excellence, a commitment to the truth, a desire to promote social justice, and a balanced life,” Acting Provost Kimo Ah Yun says.

In addition, his impact on the quality of student work is clear. In the past two years under his guidance, journalism students have received 126 national, regional and state awards for journalistic excellence.

“I strive to treat our students with kindness and respect. I teach, push, prod, sympathize, cheer and, yes, sometimes even scold them, just like my mentor did for me,” Zoromski says. “And I’m now blessed to have a large family of alumni scattered around the world, and I’ve been the one beaming in the back pew at weddings over the past 23 years.”