Way Klingler Young Scholar Awards support promising young scholars in critical stages of their careers. The awards of up to $32,000 are intended to fund $2,000 in operating costs and to cover up to 50 percent of salary to afford the recipient a one-semester sabbatical.

Dr. Edwin Antony has used his expertise in protein biophysics to collaborate with an interactive cluster of biophysicists, which could lead to advancements in plant growth without fertilizer and a NASA trip to Mars someday.

The assistant professor of biological sciences has worked to engineer enzymes to have plants add their own nitrogen (so fertilizer isn’t needed) and to reduce the weight of organic items needed in space exploration, which is crucial to the success of any long-distance expedition. Research in Antony’s group is two-pronged, though, also focusing on enzymes that perform substrate reduction in human health. This could lead to identifying novel targets to enhance chemotherapy effectiveness.

At Marquette he’s developed experimental tools that are highly sought after and will result in many collaborative publications and funding opportunities in coming years.
Antony has submitted at least four major grant proposals annually since joining Marquette’s faculty, and has secured more than $800,000 in grants for his research from the U.S. Department of Energy and the National Institutes of Health.

“This funding success has been the result of an astonishing amount of hard work,” says Dr. Edward Blumenthal, chair of the Department of Biological Sciences.

Revisionist history isn’t just a function of our modern times. Even in the time of Alexander the Great, history was manipulated to create heroes and distort facts. By tracing this process more than 2,000 years later, Dr. Jennifer Finn hopes to inspire us to question what we really know about even the most famous historical figures.

Finn, an assistant professor of history, has been named a recipient of the Way Klingler Young Scholar Award. She will use the award to work on her second book project, History Rewritten: Revisionism in the Age of Alexander the Great.

In the book, Finn will explore themes that include the mythologization of historical characters, counterfactual and virtual history, and the debate over historical negationism (distorting history for political purposes). Finn will examine the ways in which Alexander, and the historians who came after him, manipulated history’s narratives. The book also will show how similar types of revisionism also occurred elsewhere in the ancient world. The project was inspired, in part, by her interaction with students during her HIST 4953 class, The Ancient Villain.

“My students help me to think outside of the box,” Finn says. “Their unique perspectives on the ancient and modern worlds bring a breath of fresh air to my research. My interactions with them are so valuable.”

As the first true evolutionary biologist at Marquette University in at least 15 years, Dr. Tony Gamble has broad research interests — his work has already led to the rewriting of some biology textbooks. The winner of a Way Klingler Young Scholar Award, Gamble is studying the evolution of sex chromosomes in lizards and snakes, how new species originate and how lizards such as geckos can regenerate their tails.

And, he’s excelled at research productivity and potential. Since beginning at Marquette in fall 2015, he has 14 peer-reviewed papers either published or in press, including eight papers primarily from his own research group, and six collaborative papers. One paper in particular, “The Discovery of XY Sex Chromosomes in a Boa and Python,” overturned decades of established wisdom regarding sex determination in snakes and will force some rewriting of biology textbooks.

Collaboratively, Gamble has been active in seeking external funding to support his research, and was awarded a $1 million grant from the National Science Foundation to fund his work on gecko evolution. He is planning two more NSF submissions this year while having two papers currently under review.

“Everyone in the lab is passionate about investigating how evolution produces biological diversity — I don’t think we will ever run out of questions,” Gamble says.

Dr. Patrick McNamara’s research is rooted in addressing a startling set of facts: More than 23,000 people die each year in the United States from infections caused by antibiotic-resistant bacteria, and associated medical treatments cost an estimated $1 billion. Much of this resistance can be attributed to micropollutants in our nation’s waterways.

Now armed with a Way Klingler Young Scholar Award, the assistant professor of civil, construction and environmental engineering and his research group can delve deeper into how engineered treatment systems, such as wastewater treatment plants or drinking water distribution systems, can be leveraged to remove chemical and biological contaminants from waterways.

McNamara’s latest research is investigating how the country’s aging drinking water distribution systems impact the type of bacteria present in drinking water. “The breadth of chemicals and their concentrations that we find in water continue to increase as urban populations increase,” McNamara says. “My research groups aim to develop technologies and improve engineering treatment processes to remove these chemicals at treatment plants so they are not released to the environment or back to people through drinking water.

“I am especially grateful to the Way Klingler Foundation because this award will allow me to learn the latest techniques for analyzing microbial communities,” he says.

Rindfleisch, an assistant professor of history, has been named a recipient of the Way Klingler Young Scholar Award. He will use the award to travel and examine historical documents for his upcoming second book, From Creek (Mvskoke) to Cherokee (Tsalagi): The Entangled Histories of Native America, 1600–1800.

In this book, Rindfleisch will use the intertwined histories of the Creeks and Cherokees to illustrate a larger point about the interconnected lives that Native peoples led. Creeks and Cherokees intermarried, learned one another's language and culture, shared territory for hunting and trading, and occasionally had conflicts. They even formed settlements where members of both nations lived side by side, disrupting traditional patterns of authority.

"Historians have largely restricted their scholarly analysis to a specific group, tribe or nation at the expense of the many interconnections between Native peoples, cultures and histories," Rindfleisch says. "While somewhat understandable, given the voluminous records for many indigenous groups, this trend perpetuates misunderstandings of the ways those people thought of themselves and their place in North America — according to their intimate interactions with other Native groups." 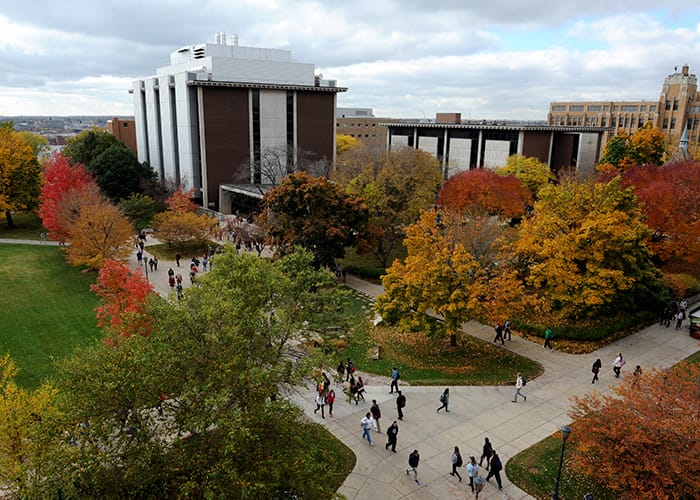