SOWJ student Paige Stoeffler ('23) writes and illustrates a lyrical picture book, Sometimes Things Happen, designed to help young readers through the process of coping with emotions that result when things don't go their way or when events are out of their control.

Dr. Aleksandra Snowden and Dr. Heather Hlavka among 2021 recipients of the President's Challenge for Racial Justice and Equity

Dr. Darren Wheelock and team are awarded $745k Mellon grant to support the Education Preparedness Program (EPP), an initiative that will help those impacted by incarceration succeed in higher education

Dr. Michelle Rodrigues' research on the effect of friends on cortisol levels was featured in the Atlanta Journal Constitution

Ms. Volz Daniels featured in article about the needs of underpriveledged children

Dr. Alexandra Crampton cautions against the use of war metaphors in efforts to combat the coronavirus

Apply for an Islam and Muslims interfaith immersion experience to travel to Dearborn and Hamtramck, Michigan over spring break. Deadline is 12/31/2017.

Dr. Lynch presented at the "Principles in Crisis" panel at the Conference by Jesuit Universities Humanitarian Action Network

The book by Dr. Holstein and Dr. Jones won the Outstanding Book Award by the North American Society for the Sociology of Sport

Dr. Hlavka publishes a blog titled "How can a "Real man" be raped?"

The study abroad program led by Dr. Wheelock is featured on OIE website

Apply for an Islam and Muslims interfaith immersion experience to travel to Dearborn and Hamtramck, Michigan over the Spring break. Deadline is January 30, 2017

Please join us in the Grand Ballroom of the AMU, November 1 at 5pm for a special lecture by Dr. Michael Kimmel.

Take a written exam with the Madison Police Department

Learn about our new interdisciplinary minor in Culture, Health and Illness

Explore our new interdisciplinary minor in Law and Society

Students, join Social and Cultural Sciences on April 28th for the Research Salon.

Dr. Semukhina presented a lecture titled "Public-Police Contacts in Russia: Revisiting the Predatory Model of Policing "at the Center for Russia, Eastern Europe, and Central Asia, University of Wisconsin-Madison

Annual McGee lecture was conducted on April 27 at 3:30 p.m. in Raynor Library.

Dr. Hlavka’s research on sexual violence is featured on Sociologists for Women in Society (SWS)

Dr. Sameena Mulla Receives Way Klingler Young Scholar Award
The Way Klingler Young Scholar Awards support promising young scholars in critical stages of their careers. Dr. Mulla, Assistant Professor of Anthropology, is one of those scholars. She conducts research that interweaves gender, sexuality, and medical legal issues.
The award, which gives the recipient a semester sabbatical, will enable Dr. Mulla to devote a semester to completing two projects: The first is an interdisciplinary project titled “Trace, Body, Voice,” (conducted with Dr. Heather Hlavka, a criminologist in the department) that stems from their Milwaukee-based court-watch program. In this study, Dr. Mulla is interested in how forensic evidence is used in sexual assault cases. Her second project is an interdisciplinary and collaboratively written book project focusing on cross-cultural practices in sexual assault intervention. Its co-authors are from Scotland, Canada, and England and it will address international variations in legal definitions of rape, police practices, forensic investigation, and post-rape advocacy.

Dr. Roberta Coles honored with AMUW Nora Finnigan Werra Faculty Achievement Award
Dr. Roberta Coles, professor and chair of social and cultural sciences, has been selected to receive the 2013 AMUW Nora Finnigan Werra Faculty Achievement Award. This annual award honors and recognizes a female faculty member who has excelled in research, teaching and service to Marquette and the community and has mentored students and other faculty. Coles will be honored by the Association of Marquette University Women at the Mary Neville Bielefeld Awards Mass, Reception and Brunch Saturday, April 27, during Alumni National Awards Weekend.

2013 Outstanding Seniors Named in their respective majors
Armando Barron (sociology), Mary Rose Geitl (social welfare & justice), Erin Hastings (anthropology), and Meghan Wleklinsky (criminology & law studies) were named the 2013 Outstanding Senior Students in their respective majors. These awards are given in acknowledgment of students who performed well academically but also have exhibited service and leadership in the community.

Dr. Gale Miller retires after 37 years of service
Professor of Sociology Gale Miller will officially retire this May. In addition to teaching more than a dozen different courses and thousands of students, Dr. Miller served as Department Chair from 2000-2003. Dr. Miller retires with a remarkable record of scholarship as well, having published 24 books and more than 70 articles and book chapters, and receiving the title Research Professor in 2000 and the Lawrence G. Haggerty Research Award in 2012.

Dr. Richard Jones Study Abroad Course
In May 2013, Dr. Rick Jones, Professor of Sociology, will lead a two-week study abroad course on Comparative Crime and Punishment. The course will focus on the contrasting corrections styles in the U.S., Finland, and Estonia. Appropriate for students majoring in criminology, sociology, social welfare and justice, and political science, the course offers students opportunities to tour prisons in Finland & Estonia and talk with prisoners, former prisoners working with offenders. If interested, contact OIE.

Annual McGee Lecture
Elin Stebbins Waldal, author of the award-winning book Tornado Warning: A Memoir Of Teen Dating Violence And Its Effect On A Woman’s Life, spoke as part of the McGee Lecture Series on Marquette’s campus. The public is welcome. Her book Tornado Warning, a first-person account of intimate partner violence, has been recognized as: a Mom’s Choice Awards® Gold Recipient for 2011 in the Adult Book Category, The 2012 Readers’ Choice Awards Best Parenting Teens Book Winner, and a Finalist in the 2012 Eric Hoffer Book Awards.

Published book
Dr. Angelique Harris published a book for undergraduates on different forms of writing within the field of sociology.

Recognition
Recognized in 2011 with the Champion of HOPE Award for an individual who Expresses Hope, Opportunity, Healing and Education for her commitment to spreading awareness about the prevalence of teen dating abuse, Waldal is a regular speaker for speaking and educating high school and college students. She has appeared on countless radio programs across the country. Additionally, she is a California state certified domestic violence advocate.

Forum on Race and Housing
Race and Housing Issues in Milwaukee was the focus of a forum the Department co-sponsored with the Institute of Urban Studies and the Department of History Speakers included scholars and community activists, and topics ranging from the history of open housing laws to current eviction practices on discriminatory practices done by the Milwaukee Fair Housing Council. 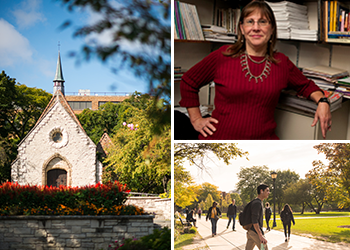