Do you have a success to share with Marquette University's Graduate School?  We'd love to hear from you. Tell us about your new job, presentation, publication, or any other award or honor you've recently received. We will post your story here and on the Marquette University Facebook and Twitter pages.

This project evaluated a behavior-analytic intervention designed to treat severe problem behavior in the forms of aggression, self-injury, and property destruction with an 8-year-old girl with ASD. A functional analysis to identify the consequences maintaining her problem behavior indicated that access to a highly preferred tangible (i.e., tablet device) and/or adult attention (i.e., reprimands) maintained her behavior. Sumter and her group taught her appropriate vocal requests for these items and withheld them following problem behavior, which immediately suppressed problem behavior and increased appropriate communication. They also introduced 10-min delays following appropriate requests (to make treatment more reasonable for caregivers to maintain) and evaluated the effects of providing alternative reinforcers during these delays. Results indicated that her problem behavior remained near zero when the alternative reinforcer was available during delays, but increased above baseline levels without an alternative reinforcer present. This suggests providing alternative items following a request that cannot be honored immediately (e.g., providing an individual with a tablet device before taking a conference call if they ask you to play with them) might be an effective strategy to maintain low levels of problem behavior.

Alumni Brundage has been working at Zablocki VA Medical Center in Milwaukee, WI as a Staff Psychologist working with veterans with spinal cord injuries for over six years. Witnessing the strength and resilience Veterans and their families embody as they cope with a life-changing disability is the most rewarding part of her job. Jessica feels honored to be able to support them in their efforts. Her graduate school training prepared her well for her work as it emphasized treating the whole person (not just a diagnosis), fostered awareness of the multicultural aspects of care, and valued working with underserved populations.

During her 5th year in the doctoral program, McVey attended the International Society for Autism Research (INSAR) Annual Meeting in Rotterdam, Netherlands. She gave an oral presentation as part of an organized symposium and also presented a poster. Her talk was titled, "Examining the influence of age on social skills intervention outcomes: Does age moderate social improvements in ASD?"

Ms. McVey is interested in mental health among youth with autism spectrum disorder. She would like to gain a better understanding of how comorbid symptoms, such as anxiety, present in autism and how treatments may be developed and/or adapted to improve the quality of life for autistic youth and adults.

Upon completion of her PhD, McVey plans to pursue postdoctoral training and later enter academia to continue to conduct autism research. She was recently awarded the Richard W. Jobling Distinguished Research Assistantship by Marquette University.

Sara and Kiersten are graduate students in the Clinical Mental Health Counseling program at Marquette University. Each were awarded an $11,000 Counseling Fellowship From National Board for Certified Counselors and affiliates.

Upon graduation, Abdulrasool intends to work with transition-age minority youth and young adults who are from underprivileged backgrounds like she is. She has an interest in those who have suffered from anxiety, depression, post-traumatic stress disorder, and substance use disorders, in a hospital or clinical setting in both national and international contexts, where mental health services are often minimized and stigmatized.

Wenthold aims to serve minorities battling substance abuse through counseling and advocacy. She has a desire to stimulate change and sustain hope, which she intends to instill in her clients.

Lindement presented at the Association for Psychological Science in San Francisco, California on May 24-27, 2018. Her paper, Industriousness Fully Mediates the Association between Agentic Hopefulness and Academic Success, focuses on  two personality traits that have received attention the literature on academic success; optimism and hopefulness.

The research found that industriousness was fully accountable for the relationship between hopefulness and academic success. This suggests that being highly industrious, or hard-working, is more important for academic success than students' sense of control in creating positive outcomes. These results provide important implications for educational institutions and suggests that activities that promote review or practice of new knowledge or skills are likely more impactful than activities designed to foster optimism or hopefulness.

Lindemann future plans to become a clinician in the mental health field and a Licensed Professional Counselor, and possibly a Marriage and Family Therapist.

As a first year graduate student in the Clinical Psychology doctoral program, Paitel recently traveled to Zurich, Switzerland, to present research at an event sponsored by the European Cognitive Aging Society. Paitel's poster presentation was titled Early detection of cognitive dysfunction via ERPs: Anterior N2 amplitude and the role of APOE and alexithymia. The project employed event-related potentials (ERPs) to detect subtle differences in cognitive functioning amongst healthy older adults, half of whom carry the Apolipoprotein-E (APOE) ε4 allele as genetic risk for Alzheimer's disease. Her findings may allow for early detection and intervention for individuals at risk for developing cognitive dysfunction. Upon completing her program, Paitel plans to pursue a career in the university setting where she can teach and continue performing research in her field.

All of Marquette’s Clinical Psychology candidates for predoctoral internships matched with internship positions for the fifth year in a row. This is a very competitive process and Marquette consistently rates above the national average for internship matches. Read more about the process in Marquette Today.

Ms. Elverman presented her poster on Preclinical Markers of Risk for Alzheimer's Disease in a Task of Inhibitory Control at a conference sponsored by the International Neuropsychological Society in Boston, MA in February. Her study revealed significant genetic differences in event related potentials in healthy older adults, revealing a new marker of Alzheimer's disease risk, and indicated the importance of executive abilities, such as inhibition, in preclinical Alzheimer's disease. She found that inexpensive and easily accessible event related potentials may be more sensitive to preclinical risk than cognitive testing alone.

Marra attended the annual International Neuropsychological Society meeting in New Orleans, LA. At the conference, Marra presented a research poster, entitled "An updated exploration of the frequency of suboptimal effort in a healthy undergraduate sample," which explored the frequency that students put forth sub-optimal effort in psychological testing. Marra also presented a paper, entitled "Cognitive reserve predicts post-operative cognitive decline in anterior temporal lobectomy patients," which demonstrated how higher education is associated with better cognitive outcomes in patients who undergo neurosurgery to treat intractable epilepsy. He believes his research may help clinicians form more accurate prognoses for their patients. Once he completes his doctoral program, Marra hopes to work at an academic medical center.

Moss traveled to Savannah, GA for a conference sponsored by the Society for Developmental and Behavioral Pediatrics. At the conference, Ashley presented research she conducted on the sleep quality and disease outcomes among adolescents with Type 1 Diabetes Mellitus.

Ashley is currently interning at Children's Hospitals and Clinics of Minnesota, and plans to pursue a Postdoctoral Fellowship in Pediatric Psychology after completing her current doctoral program.

Marquette University hosted its 7th Annual Diversity in Psychology Research Conference on Saturday, October 8th, 2017. We were excited to welcome undergraduate and graduate students and faculty from Marquette and 16 colleges and universities.

Congratulations to the winners of the poster competition:

Second Place: Authentically American? Examining the Relationship Between Levels of Patriotism and Anger when Viewing Violence Against Ethnic Groups

Third Place: The Effects of Assertiveness and Race on Reactions to Female Speakers

First Place: I-sharing after a Gender Threat Increases Liking for a Gay Man and Decreases Defensiveness

Second Place: Give Us a Curriculum and an Outline

Anthony was selected as an inaugural recipient of the Milwaukee Cream City Foundation's LGBTQ+ Scholarship. The $2,500 scholarship was created to support LGBTQ+ and ally students pursuing post-secondary education.

Mirabito traveled to Denver, Colorado to present his research at the American Psychological Association's (APA) conference. Lucas's poster presentation, entitled “Give Us a Curriculum and an Outline!” Insights from Gay-Straight Alliance Advisors on Providing Mental Health Programming to LGBTQ Students, investigated the feasibility of a mental health promotion program designed to be implemented in a gay-straight alliance (GSA) group meeting in high schools. GSA advisors (usually teachers at the school) were asked about how they would like such a program to be designed, how much need they felt there was for the program, how they felt students would react, and the common mental health challenges they hear from their students.

It has been shown in past literature that LGBTQ high school students face a greater number of mental health challenges and stressors due to their identity. Currently, no mental health promotion program specifically designed for this population exists. This research represents an attempt to meet the unique needs of LGBTQ students in a culturally appropriate way. Lucas is also the recipient of a $1,000 research grant from the APA.

Ryan was in his 2nd year PhD student in Counseling Psychology when he attended the Black Graduate Conference in Psychology in Miami, FL.  Ryan presented a poster on factors that support career success for first generation, low-income college students.

The purpose of Ryan's research is to investigate the factors, strengths, and resources  that enabled first-generation, low-income, college alumni of color to achieve career/life success. Outcomes of this study will provide ideas for how we can best empower such students at the individual and systemic level.

Ryan's career plans include serving as a psychologist, researcher, and consultant to provide mental health services and promote psychological well-being for minority populations. Ryan is also a recipient of the Marquette University Graduate School Diversity Fellowship.

Ms. Hood presented on Career Exploration and Liberation: A Career Program for First Generation, Low-Income College Students in Montreal, Q.C., Canada this spring for the American Counseling Association and Canadian Counseling and Psychotherapy Association. The study presented theoretical background, implementation, and evaluation of a career development seminar for incoming college freshmen who are the first in their family to attend college and who also come from low-income backgrounds. The intervention was a three-day program that integrated traditional career development theories with liberation psychology. Stephanie and the other presenters shared the results of a mixed-methods evaluation of the seminar, along with recommendations for similar programming.

Erin presented her research on Neurobehavioral Examination Performance and Motor Intrusion Errors in Mild Cognitive Impairment versus Dementia at the American Academy of Clinical Neuropsychology Conference in February in Boston, MA. Her project examines the ability of a newly developed, rapidly administered measure of broad cognitive function with a specific focus on identifying signs of executive dysfunction to distinguish between dementia subtypes and between dementia and mild cognitive impairment. Proper diagnosis of dementia spectrum conditions is necessary to better inform patients as well as their families and care providers about issues related to disease management and course. 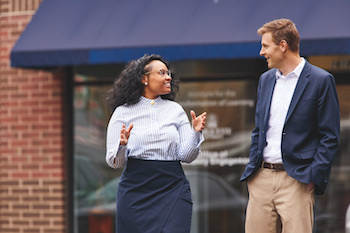