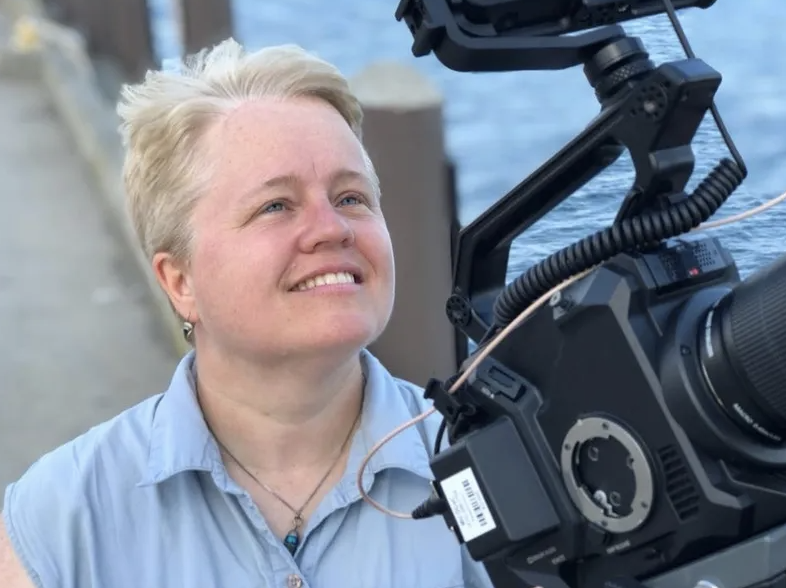 M.F.A. in Film Production at Boston University
M.S. in Corporate Communication at Ithaca College
B.A. in Broadcasting at SUNY Oswego

Kris has created various digital media for employers and clients, including the Kennedy Center for the Performing Arts, the Smithsonian Institution, the National Geographic Society, GE, Xerox, and the American Academy of Ophthalmology, among others.

While Kris has more than fifteen years of professional experience, she has always felt at home behind a camera. She discusses her path to becoming a filmmaker here:

Passing
Best of the Fest Shorts

When a young C.E.O. is found dead, a small-town Lieutenant finds himself caught in the middle as his two main suspects accuse each other of murder.

Evie, a government contractor, gets abducted by spy-on-the-run Georgia. She has to stay alive long enough to decide whether to help Georgia deliver her mysterious package.

After several pandemics sweep the world, a recurring nightmare makes it impossible for a single dad to decipher when he is awake or dreaming during the outbreak of 2024.

A short observational documentary that focuses on the migration of sandhill cranes near Baraboo, WI.

Will has always been the hero of his own stories in spite of the fact that no one believes him. How much of it is true? And how much does it really matter?

Drawn to the beauty and history of the Cape, a recently widowed teacher flounders in her quest to fit in as she strives to prove her paranormal encounters aren't just an outsider's fantasy.

Young of the Year

Between the predators, the tourists, and the long migration ahead life is a challenge for the roseate tern, especially during the first summer of life.

The Digital Media department at Marquette offers my students and me a wonderful opportunity to explore all the ways in which media gets created and used in the modern age. I can bring to the classroom my experiences making both documentary and narrative films, corporate video, and educational media and use that to broaden my students’ expectations and opportunities.