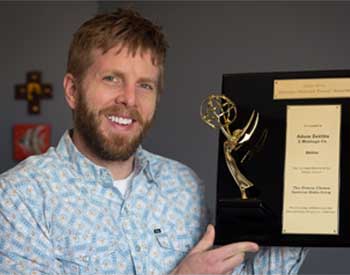 Q. Why did you decide to base your company in Chicago?

After Marquette, I lived and worked in Milwaukee as a producer for an advertising agency. A job opportunity came up in Chicago and I moved here. When that job ended in mid-September of 2002, I contacted some of my former vendors in Milwaukee and asked if they might need my help as an editor. They soon became my clients. Without dedicating myself full-time, I earned more in October than I ever had as an employee. That’s when the light bulb went on and I began to work in earnest for my own company.

Almost thirteen years later, I’ve stayed in Chicago because I’ve been able to build a business serving clients in Chicago and Milwaukee. I’m also able to easily fly from Chicago to various sporting events around the country for my network TV clients. Chicago is a livable city with convenient transportation options, a beautiful lakefront, and vibrant nightlife. The coasts may have more television production, but from here they appear to be more saturated markets. I want to stay where the expertise I bring as a creative editor has more demand.

Q. What type of editing do you like to do?

I truly enjoy the variety my work brings me. I’ve worked on many types of television shows from a 22-minute reality show destined for a cable network to an hour long PBS documentary. I just returned from the College World Series in Omaha where I worked on very short-form pieces (less than a minute each) for ESPN to use during games. Immediately after, I went to work on an eight-minute internal marketing video for a large food and beverage company.

But even more than the diversity of length in my work, I appreciate the variety of topics. As I work, I learn and become an “instant expert” on the videos I edit. 2015 MLB Number 1 Draft Pick. Integrated Lean Six Sigma business methodology. Who shot J.R? Robotic milk production. Alien sightings in the U.K. These are just a few of the topics of my work.

Finally, the people I collaborate with—my clients and colleagues—make work not feel like work.

Q. The documentary you edited, “The Frozen Chosen” recently won a Midwest Emmy. What is it about?

I was approached by a producer I’ve worked with on the PBS television series, Pioneers of Television. He had spent two seasons filming a unique community of Wisconsin fishermen. Each winter they cut a hole in the ice and wait for a chance to spear a sturgeon as it swims below them. In the documentary, we follow two families who have had uncommon success in catching the large fish before the season ends. I was happy and grateful to be able to collaborate on such an interesting subject.

Q. Live TV and the Super Bowl must be challenging. Anything unusual ever happen?

Generally, when I’m working at large sporting events, I have the time to edit my assignments. However, my first Super Bowl was a unique exception. Mike Holmgren was the coach of the Seattle Seahawks. His wife, Kathy, would not be attending the game because she was on a humanitarian mission with their daughter in Africa. I was working a night shift for the pre-game show but was asked to stay through the day to finish editing this story. Footage from Kathy’s Africa trip would be flown to a major city where a satellite uplink was established to transmit it to the edit truck at the game in Detroit. After working more than twenty consecutive hours, I would have only an hour before air to finish the story.

Other editors helped in order to make the deadline. One editor helped to capture the footage as it came in from the satellite. That way I could work while the rest of the footage was being captured. After a very quick edit with multiple producers standing behind me, the piece was ready. I saved the cut and another editor played the footage to the broadcast truck. Before that was even done, the piece began to air. Editors and producers gathered around the monitor to watch the story. After it finished, a slow clap and then cheers erupted from everyone gathered. We hugged and congratulated each other on getting it done just in time.

Since it was my first Super Bowl, I didn’t realize what an extraordinary event that was. There is not usually hugging in an edit truck!

Q. Do you enjoy doing the Final Four and other sporting events?

I’m happy every time I am asked to work at a major sporting event. For the past several years, I’ve been fortunate enough to edit the team introductions at the Final Four for CBS. It is a blast to see my work played on the big screen in stadiums full of packed and screaming fans. I find it humbling to know that millions more are watching at home.

Q. Are reality TV shows still viable? If so, why?

Of course they are! Whatever your opinion of their value, they are a cheaper form of programming. There is a seemingly endless supply of characters seeking their fifteen minutes of fame. Reality TV shows also support the trend of splintering television audiences into very specialized niches.

Q. What developments do you see in TV programming in the future?

Although I work as an editor and not in development, I do see some trends continuing. Streaming services will continue to gain viewers. Live-event television will keep people tuned into the major networks. Reality television is here to stay. However it shakes out, I’m eager to continue making my creative contribution.