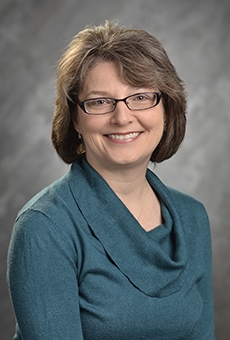 Sue Weinlein is a 1991 Marquette journalism school graduate. She has worked as an editor of books, games and magazines. She's also been a creative director and website managing producer, and now is senior managing editor at Northwestern Mutual.

Actually, in junior high, when I read an article about it in "Dynamite!" magazine. It sounded exciting, like creating a shared story with your friends. But I didn't actually start playing until college, with a group at Marquette. At that time, of course, I never imagined I'd ever work for the company that invented D&D -- that I'd one day help to create role playing games of the future. (I don't suppose my journalism professors imagined it either!)

2. You have said D&D involves one's imagination. How so?

Playing a role playing game, like D&D, is a little bit like being in a play with a director but without a script. Even though you're sitting around a table, you and the other players take on the roles of the characters you invented for the game—wizards or warriors or other archetypes you've seen in fantasy films. The director, called the "Dungeon Master," describes the scene to you, then asks: “What do you do?” That's where the imagination comes in. It's not like a board game where you just move your token three more squares down the track. In role playing games, your character can do anything you can think of—or at least, try. The players all use their imaginations to advance the story together through action, investigation, puzzle-solving and interacting with others.

3. Not many women have worked with game design. How did you get involved?

No, it's been a pretty male-dominated industry since the 1970s. But actually, my Marquette ties helped me get my foot in the door. While I was still in school, I was beginning to think about careers outside of newspapers. I met another Marquette alum, James Lowder, who worked as a book editor for TSR, Inc., the creators of Dungeons & Dragons. Hearing of our shared alma mater, he was happy to show me around their Lake Geneva, Wisc., offices and tell me all about his job. Later, when his department was looking for an editorial assistant, they remembered me. I'll always be grateful to Jim, who's still active in the industry as a successful book and game author/editor.

4. Amazing Stories has had a fascinating history. At one time, you were managing editor. What did you do?

It was fabulous to have a small part to play in the long history of science fiction's most famous magazine. As Amazing Stories' managing editor in the late 1990s, I evaluated story submissions, edited essays, worked with our art director, organized special events for fans, and handled author contracts. I worked with writers to shape their manuscripts and copyedited fiction under our Editor in Chief, Kim Mohan.

5. How does your background in game editing help you in your current position?

Although financial communications and gaming rulebooks don't sound much alike, you'd be surprised at the similarities. Both fields involve taking extremely complex topics—whether it's the unique value of a portfolio-based annuity or the escalating fire-breathing abilities of a red dragon—and making them accessible for busy readers. The creative projects I've done in the past have helped me approach my current work in an innovative fashion. And of course, the discipline I developed studying journalism at Marquette created the best possible foundation for my career.

6. As a mentor, what have you done to help students?

I enjoyed mentoring one of our interns at Northwestern Mutual, helping her achieve her final-semester goals, including writing strategic communication plans. I've also been happily involved with Marquette's mentoring program. The college paired me up with a student majoring in corporate communications. We've had fun working on her resumes, cover letters and networking approach. She's even come to shadow me at the office to get a taste of the professional world she's about to enter. Maybe I'll be able to help her the same way Jim helped me all those years ago.