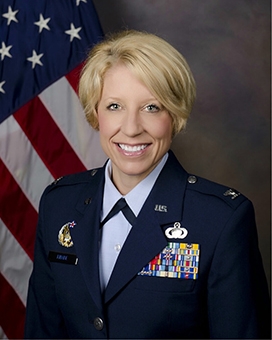 Colonel Ann Peru Knabe has a unique life. A 1990 Marquette College of Communications graduate, she also earned a Ph.D. from Marquette in 2012. She has taught public relations, journalism and communications at the University of Wisconsin-Whitewater for 17 years, and also does strategic communication consulting. Colonel Knabe's 28 years in the Air Force has enabled her to travel to 20 different countries and deploy four times in support of U.S. national security objectives.

1. What deployments have you had as an Outreach and Engagement Officer?

Two tours to Al Udeid Air Base, Qatar - where I directed media relations, public affairs and internal communication for the 379th Air Expeditionary Wing. While based in Qatar, I traveled all over the Middle East and parts of Africa. I had one tour with the Guantanamo Bay War Court, called the Office of Military Commissions. I was based in DC and directed media operations, serving as the spokeswoman of the war court. I escorted media to and from GTMO during arraignments and trials. One tour with U.S. Central Command Based was in Tampa. I served as a Senior Strategic Communications Planner for U.S. military missions in the Middle East and Afghanistan.

2. What was the most interesting one and why?

Every deployment is different and interesting. I like my tours to Qatar the best because I did a lot of traveling, saw amazing people doing incredible missions, and got to tell their story to the world. There was even adventure. Once I was covering a story in Ethiopia and the plane broke. We had to stay on a military compound in an austere village, slept on the ground with scorpions, and ended up eating goat meat when the MREs (Meals Ready to Eat) ran short.

3. What did you do with the Guantanamo Bay War Court?

Directed media relations, led press conferences, worked with international journalists every day to update them on the legal aspects of the detainees at GTMO.

4. What is it like to work in the Pentagon?

The Pentagon is like a small city. There are 22,000 people working the building, and the majority are civilians, not military. The most difficult part of the job is finding your way around when you first start. There is a completely different culture in Washington. People are pretty intense, probably because they are dealing with significant national security issues that affect the entire nation. I try to keep my Midwest cheery outlook when I work in the Pentagon. Another interesting dynamic is rank. back in Wisconsin, there are very few colonels. In the Pentagon, a colonel doesn¹t carry much weight.

5. What have you done so far that you are the most proud of?

I am most proud of juggling a family, a civilian job, and my Reserve commitment for more than two decades. It¹s almost like a 3-legged stool—if one area gets out of whack, the other two areas are affected. If you aren¹t careful, the entire balancing act can tumble. Sometimes a person feels like they live two different lives: the military one in DC, and the civilian world back in Wisconsin. Along the way I earned my doctorate. The Marquette community, and especially my dissertation advisor and chair, were always supportive of my commitment. And of course my family has sacrificed for more than 20 years. In the last 7 years, I have been deployed or doing military duty at least one third of the time.

6. What have you done with the MU alumni mentoring program?

I mentored an amazing student named Mary last year, and am mentoring a woman named Sigrid this year. In both cases, I met the students for coffee, helped them with resumes, took them to meetings /agency tours, and tried to make myself available. I am a huge believer in networking and connecting students to professionals, and try my best to connect them to the PR community. There¹s no greater compliment than a student saying you made a difference in their life.