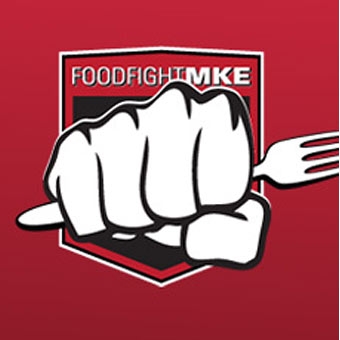 Diederich College students Dominic Pellitteri and Sallie Stacker both knew that they wanted to gain an inside perspective about agency life when they signed up for internships with Jigsaw Creative Advertising. During their experience working with the Milwaukee-based agency, both students learned more than they'd ever imagined.

It began when the Marquette students were hired to work with the agency's OrangeAid internship program, which adopts pro-bono projects for non-profit organizations each semester. Shortly after they started at OrangeAid, Pellitteri and Stacker became involved with Milwaukee Food Fight, a campaign launched to inform the public about poverty and hunger in the city of Milwaukee.

The interns partnered with the Hunger Task Force of Milwaukee, an organization that provides food to pantries and shelters around the city, helping to develop a campaign aimed at getting more people involved in the cause. One of the primary campaign goals was to promote awareness about hunger among local college students, increasing their involvement in the fight for this cause.

As part of the team of OrangeAid interns, Pellitteri and Stacker took on the respective roles of campaign strategist and copywriter. The students set to work brainstorming ideas to reach their target audience, such as encouraging donations through social media and texting. Food Fight Milwaukee developed a campaign website featuring statistics about local hunger and poverty rates, as well as video stories provided by the Hunger Task Force showing the individual people behind the statistics.

During their internship, both Pellitteri and Stacker were able to tap into the skills that they had polished while studying in the advertising program at Marquette University. Throughout the process of developing and launching the campaign, both also learned about the professional world.

“This is the first project outside of school that I've ever worked on, and it really surprised me at how long the process takes to get something of the ground,” says Stacker. “We were creating something from scratch, building something that we hope really changes the community...I definitely learned that change takes time. In class you're used to cranking out projects once, and even sometimes twice a week. Working at a different pace was really surprising, and even hard to adjust to.”

“I really learned what it meant to work as part of a group for the good of the end goal,” added Pellitteri.

Food Fight Milwaukee launched its first event on November 11, 2011 in the form of a flash mob that assembled in front of the Bradley Center before a Marquette Basketball game. Participants drew crowds as they danced to Michael Jackson's “Beat It” and encouraged viewers to donate to the Hunger Task Force via text message. According to Pellitteri, the event was “a lot more work than originally expected, but we got a great response, resulting in $500 in donations raised that night alone.”

Other creative tactics employed by the interns were bar coasters with humorous slogans such as “wake up with a pounding sense of accomplishment” on one side, and information about text donations to the Hunger Task Force on the other. The coasters, designed to reach the college student audience, were distributed at bars throughout the city.

Future plans include partnering with local businesses to host more such events to promote awareness for the cause. OrangeAid hopes to raise $5,000 through text donations during this campaign, with all proceeds donated to the Hunger Task Force. Both Pellitteri and Stacker are an instrumental part in making this happen.

“It has been a really enjoyable experience. OrangeAid and FoodFightMKE have taught me so much about the advertising industry,” says Stacker of the experience. “Working on a project like FoodFightMKE, the end result is really heartwarming when you see something that you created helping others.”