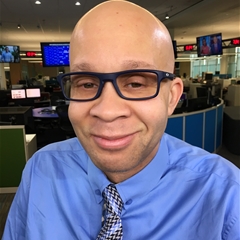 The Diederich College of Communication is pleased to announce the appointment of Ron Smith as the new Editor/Project Director of the Milwaukee Neighborhood News Service and Instructor of Practice in the Department of Journalism and Media Studies effective February 1, 2019.

"I am thankful to be the recipient of the best gift one could ever receive: the Milwaukee Neighborhood News Service. Under the selfless leadership of Sharon McGowan, and because of the tireless work of its talented staff, NNS has emerged as a must-read in Milwaukee's media landscape. And we are going to go even higher. We will celebrate the diversity in our communities, and we will deepen our reporting to become an even more ferocious watchdog for residents who are often ignored but whose voices need to be heard. The Marquette University Diederich College of Communication deserves recognition for fulfilling its social justice mission, and I am delighted to return to Milwaukee, where I can put into action the tenets of the university: Faith. Excellence. Leadership. And, above all, service to others."

Ron Smith currently serves as the managing editor for news at USA TODAY. Before moving to the Washington, D.C., area in 2016, Ron was the deputy managing editor for daily news and production at the Milwaukee Journal Sentinel, where he oversaw the breaking news hub, production desks and was the key point person for print story selections and workflow. He also has worked as an editor at The Oregonian, the Los Angeles Times and Newsday. Ron began his professional career as a reporter and editor for two weekly newspapers in the Los Angeles areas before becoming a political reporter for a daily legal publication in downtown Los Angeles. He’s also worked as an advertising sales director and as the interim student adviser for New Expression, a citywide teen publication written by and for Chicago youth that had a monthly circulation of 70,000. Ron has edited several Pulitzer Prize-winning reports and is known for championing great journalism and the great journalists who produce great works.

In addition, Ron is active in the National Association of Black Journalists, the American Copy Editors Society and the Online News Association. He has led sessions for Poynter, American Society of News Editors, National Association of Black Journalists and the Asian American Journalists Association and is the co-leadership chairman for the American Society of News Editors. Ron also serves as an instructor for the organization’s Emerging Leaders Institute, which trains diverse mid-career professionals to be newsroom leaders. He holds a master's degree in leadership from Marquette University, where he has taught courses on leadership, journalism and communication. He "proceeds until apprehended' and is not afraid to roll up his sleeves and help others — all while having fun along the way.