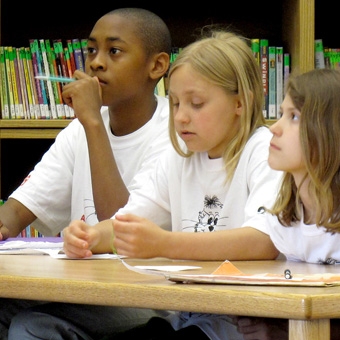 Elementary Students Learn the Art of the Argument

Honey Creek Elementary School instructor Tina Harris began with a vision: using public debate as a tool to help her fifth grade class develop research, communication and critical thinking skills that were compulsory to the curriculum.

“The goal was to expand the students’ analytical abilities; to make them better problem solvers and evaluators of information,” says Harris.

The timing, as it turned out, was serendipitous. Soon after the initial brainstorm, Harris received a letter about classroom grant opportunities. She applied and was awarded the Excel Grant, a monetary endowment designed to encourage innovative teaching methods.

Tina Harris and her students selected the initial debate topics and immediately plunged into the research. As a first time endeavor for the school, there were issues of getting the project off the ground and questions of how to structure the format. Harris, who was aware of the debate team at Marquette, contacted the university for guidance and was put in touch with David Denomie, the assistant director of debate at Marquette.

From the start, the process of learning about debate presented both possibilities and challenges. Students continue to learn how to separate logic from emotion when arguing a point of view, how to conduct thorough research and how to refine methods for determining reliable sources of information.

“This is first time that debate has ever been initiated in elementary schools earlier than the middle school level in Wisconsin,” says Denomie, who together with Marquette debate team member Nicole Thompson worked closely with students. “We have now been contacted by another elementary school in the city interested in starting a program this fall.”

The topics are often ones that directly impact the students’ lives. Issues such as locker searches, year-round school and the legal driving age are used to engage the kids directly in the process.

Participants complete both individual and group research in preparation for a debate, and work in teams to support one another on the day of the event. Even if the students are assigned to endorse a point of view that they disagree with, they are able to find facts that defend their arguments.

According to Denomie, watching the students develop as critical thinkers has proven to be a rewarding experience.

“The Honey Creek Elementary program was really inspiring for me,” he says. “The students have expressed how empowering the debate experience had been for them. So often, frustration among youth arises from an inability to express themselves in more constructive and effective ways, and to understand how to respectfully disagree with those who don’t see things the same way. Debate in the schools, even in the early grades, is an activity that helps them develop these capabilities.”

Back to Community Connections page