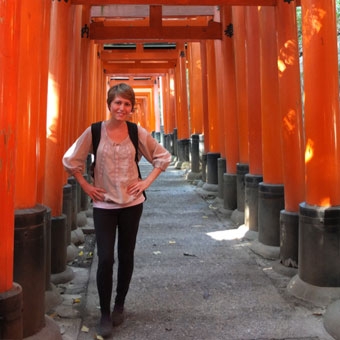 Melanie Pawlyszyn had been interested in East philosophies and religions since high school. The Journalism major with a German language minor traveled to Europe during her college career, but wanted to explore other corners of the world. So when she found a semester-long study abroad program that focused on Buddhism in Japanese culture, she immediately jumped at the opportunity.

Melanie enrolled in a program called “Japan and Buddhist Tradition” through Antioch University. The three month program took her throughout Japan, allowing her to get a glimpse into the lives and cultural traditions of the country's residents. The program provided participants with diverse opportunities, which included the chance to visit centuries-old temples and castles, pray with monks in monasteries and to experience traditional Japanese meal rituals and living conditions.

“I wanted to get a real flavor of Japan and what the people there are experiencing everyday,” said Melanie.

During breaks from the classroom, Melanie hopped the bullet train and traveled around the country, visiting regions as diverse as Tokyo, Nikko, Osaka and Kyoto. She saw Sendai, the site of the disastrous 2011 earthquake and tsunami that left much of the area devastated, and even Hiroshima. Both sites made a strong impression on her, and Melanie credits this experience for a renewed interest in world events.

“All the history that I learned about in Japan has definitely motivated me both as a journalist and as someone who wants to work for the anti-nuclear cause,” she says.

Melanie also credits the program with a permanent shift in her cultural perspective. “The program and the Japanese culture both had a collectivist mentality that encouraged us to put the needs of others before ourselves.”

The experience of being a traveler with limited Japanese language skills also changed the way that Melanie perceives students form other cultures on the Marquette campus. She mentions an increased empathy with those adapting to life in a new country.

“I find it easier to relate to foreign students on campus, and I find myself reaching out and helping others overcome cultural differences now,” she says.