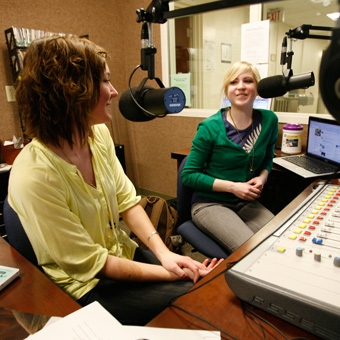 Rockathon Raises Money and Awareness for the Homeless

This past November Marquette Radio hosted its third annual Rockathon, a fundraising event for the Milwaukee Rescue Mission homeless shelter. Now in its third year, Rockathon brings together the entire staff of WMUR with three-days of continuous live programming to support this important cause.

Rockathon first began when then Marquette Radio General Manager Matt Montgomery approached faculty member and student media adviser Barbara Volbrecht about hosting a fundraiser to raise public awareness of homelessness. Montgomery had seen the effects of people living on the streets in the neighborhoods surrounding the Marquette campus, and was moved to become involved. Together, the two brainstormed the fund drive marathon as a way for the MU Radio staff to combine entertainment with public service.

The Rockathon event includes seventy two continuous hours of live radio broadcasting from locations on and off campus, with content ranging from lighthearted to serious. Student disc jockeys interview Milwaukee Rescue Mission staff and individuals who have been helped by the organization. There are also on-air performances by local musicians, broadcasts from basketball games at the Bradley Center, and even live karaoke contests.

Rockathon makes a lasting impression on the students involved. According to WMUR music director Henry Arrends, the best part of the annual event is the bonding experience for the station's staff members.

“It’s great to see the level of excitement that the DJs have,” Arrends says. “It’s also a great chance to get to hang out and know each other better.”

Patrick Creed, another MU Radio staff member, mentions his hopes for more student involvement as the event continues to grow each year.

“We want it to get bigger every year and it has been happening so far,” says Creed. “We're helping the Milwaukee Rescue Mission, so it's been a benefit to the community.”

Rockathon proves to be a popular event, allowing students to hone their broadcasting skills while working to help others. The radio marathon involves the entire Marquette University campus, bringing in hundreds of dollars in donations each year.

“Our goals are to grow and learn more each year that we do this,” Volbrecht reflects. “Rockathon is about students learning to reach out, get involved and really make a difference.”