Michel Martin, award-winning journalist and weekend host of NPR's All Things Considered, spoke as the Ralph H. Metcalfe Fellow Lecturer on January 18. Prior to this university-wide event, Michel took the time to speak specifically to College of Communication students, who had the opportunity to ask questions during a small, intimate discussion in the jPad. Martin has spent more than 25 years as a journalist, covering stories for national print, television and radio news media and had tremendous insights about the industry to share.

Prior to the sold-out screening of his documentary MILWAUKEE 53206, director Keith McQuirter joined digital media students in the jPad on February 6 for a question and answer session. McQuirter's film tells the story of those affected by mass incarceration in America's most incarcerated zip code. This film examines how decades of poverty, unemployment and a lack of opportunity has contributed to the crisis of mass incarceration in our community and across the nation.

Scott Dikkers, the longest-serving editor-in-chief of The Onion, spoke as a Burleigh Media Ethics Lecturer on February 15. In a hilarious and timely lecture, Dikkers chronicled the early years and influence of The Onion. He examined the impact of satirical news outlets modern politics. His work has won the Thurber Prize for American Humor, a Peabody, and over 30 Webby Awards.

Jen Lada, contributor to ESPN's digital platforms and College GameDay presented this year's Axthelm Memorial Lecture on April 11. Lada is a proud graduate from the Diederich College of Communication with a degree in Broadcast and Electronic Communication. Lada discussed the role that authenticity played in her career and the challenges she overcame to achieve success in the competitive field of sports broadcasting.

Walker Guevara is the journalist who co-directed the Pulitzer Prize-winning Panama Papers investigation across 230 global media outlets, leading to resignations and criminal investigations around the world based on leaked documents from a law firm representing celebrities and politicians. 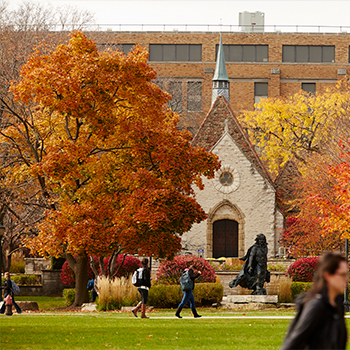