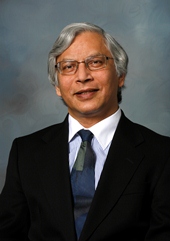 Dr. Chowdhury returned to Marquette University from Switzerland where he was the chief economist of the United Nations Economic Commission in Europe for the past five years. He served as the director of the Master of Science in Applied Economics Program at Marquette from 1991 through 1995. He was also a Senior Fulbright Scholar at Thammasat University, Bangkok, Thailand, from 1995 through 1996, a visiting professor with John Hopkins University in 1996 and a senior researcher with the Central Bank of Finland in 2002.  In October 2010, Dr. Chowdhury was appointed to Federal Reserve Bank of Chicago's Academic Advisory Council. He has published extensively in professional journals and various media outlets. His specializations are in the areas of US macroeconomy, international finance, and global economic issues.

"The Puzzle of Heterogeneity in Support for Free Trade," Forthcoming,  Business and Politics, 2014 (with Jeffrey Drope).

"Virtual Currency and the Financial System: The Case of Bitcoin,"  Investments and Wealth Monitor, March/April, 2014 (with Barry Mendelson), pp. 46-54.

"Inflation and Inflation-Uncertainty in India: The Policy Implications of the Relationship", Journal of Economic Studies, Vol. 41(1), 2014, pp. 71-86.

"The Political Investment Cycle within China: The Next Transition and its Investment Implications" Investment and Wealth Monitor, September-October 2013, pp. 30-34 (with Barry Mendelson).

"The Geographical Dimension of the Development Effects of Natural Resources," Environmental; and Resource Economics, Vol. 52(4), 479-498, 2012 [with Fabrizio Carmignani].