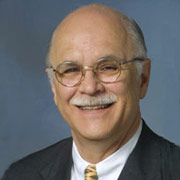 Dr. Shrock worked for Oldsmobile Division and Delco Radio Division of General Motors Corporation while a cooperative students and as an electrical engineer after graduation.  He served as an officer in the United States Air Force from 1965 to 1970.

Dr. Shrock remains interested in transportation policy and higher education, with special interests in advancing management education and in fostering effective use of resources in offering educational programs.

Dr. Shrock and his wife, Sandy, have two children and four grandchildren who are among their greatest interests.  Dr. Shrock is a model railroader, avid reader of mysteries, and recent returnee to golf.